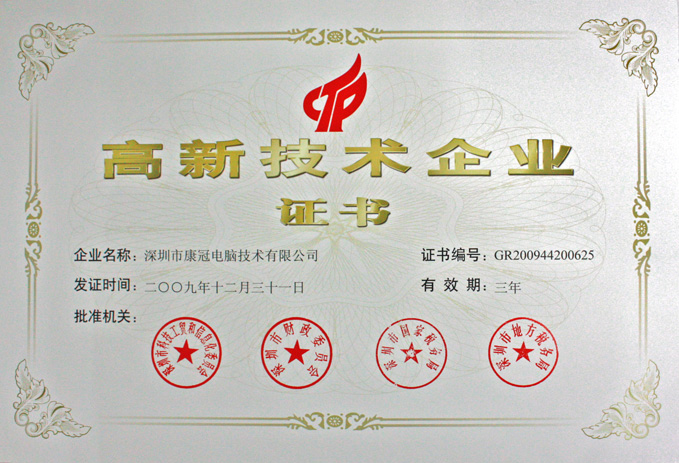 On April 1st, KTC was included into the 3rd List of 2009 China Hi-tech Enterprises Candidates. And after 3 months’ publicity period, KTC has recently formally been certified as China Hi-tech Enterprise. As per relevant stipulations, Chinese government departments will give additional support to enterprises which have been certified as China Hi-tech Enterprise, including a preferential 15% income tax rate for 3 years.
As one of the earliest manufacturers engaged in display terminal products ever since its establishment in 1993, KTC Technology Group is engaged in the development, manufacturing and marketing of flat panel terminal products. KTC enters the industries of display, LCD TV and notebook PC gradually through independent R&D with a pioneering spirit as a industry leading role. All of KTC products possess proprietary intellectual properties rights and rank top in the industry.With the rapid and steady prog.ress of our R&D abilities, KTC R&D Center was evaluated as Shenzhen Longgang District Engineering R&D Center in 20003 and Shenzhen Municipality-level R&D Center (Technical Center Category) in 2008.
With the ever-increasing R&D abilities, KTC keeps expanding its business. Sales of display products reached its first highest in 2007, and according to authoritative statistics, KTC ranked top 5 in display manufacturing industry globally. Starting from the year 2008, sales of LCD TV surpassed sales of display products to be KTC‘s key products. Currently, KTC maintains long-term and steady partnerships with a number of famous home appliance manufacturers and PC brands located across over 180 countries and regions in the world with 48% products going to overseas market and a 58% annual growth in 2009 over the same period of 2008.Along with the ever-increasing products sales, KTC’s production scale also keeps expanding. In July, 2009, over 70,000 square meters factory was constructed, bringing to a total of 170,000 square meters of factory area with a total of over 3,000 employees. To adapt to the fast expansion and integrate inner resources, Shenzhen KTC Group was set up in October, 2009.